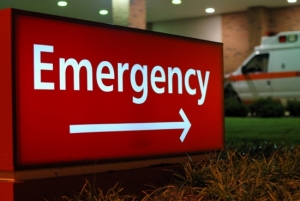 It began like most Mondays . . . thinking about the projects that awaited me at my desk, posting my weekly lectionary reflection on my Prayer Book Guide to Christian Education page, triaging what the rest of the week’s work would look like. But then, triage became a reality.

As many of you know, I’ve spent my fair share in Norwalk Hospital‘s Emergency Room over the past 3+ years. My mom, Trinette, has now been in a nursing home for 2 years with late-stage Alzheimer’s disease. So, I get regularly called to rendezvous with her at the E.R. when she has a fall. My dad, Cliff, now 89+, has been in an assisted living facility for 1.5+ years. And he’s had his moments, too. One day this past January I had the “honor” of having them both in the E.R. at the same time. So today began with a call from a nurse where he lives to tell me he fell during the night and was experiencing some pain. Another Monday at the E.R.

I’m ready for these spur of the moments calls now. I know I need to throw my phone chargers in my purse. Grab a book (aka Kindle), my laptop so I can work if possible, a bottle of water, and whatever snack I happen to have on hand. It might be a long day. And today, it was. Left the car at the valet parking at 9:00am. Got back in around 4:30pm.

Dad is fine. Of course, it took all day to figure that out. Since he wasn’t in need of any monitoring, we were delegated to one of the hallways as the 25+ E.R. bays were full on a Monday morning – plus the whole day as individuals came and went. Dad dozed in and out as I spoke to doctors, nurses. technicians, and even the Brookdale staff who came to check on him. By 5:15pm, he was back home.

What struck me most all day was the incredible ministry exhibited by all those who spend their days working in an Emergency Room of a city hospital. “Hanging out” at the intersection of the entrance hall, treatment bays, and hall toward all the x-ray, CT-scan, & other departments for almost eight hours, I developed an awe and appreciation for the nurses, doctors, technicians, housekeeping, social workers, patience advocates, security guards, and ambulance EMTs who passed me continually.

From where I was “stationed,” I probably saw and heard more than I should have. Privacy is tough in such a location, despite curtains and hushed voices. You hear the moans, cries for help, and questions being asked to those who are hard-of-hearing or unresponsive.

Every attending caregiver showed the same concern for all patients who were brought in: on their own volition or via ambulance. There was the elderly woman in the bay right across from us; she appeared to have been in a car accident. Turns out she had fallen out of bed at her nursing home . . . broken nose, stitches to her face, and then taken to surgery when it was discovered she had cranial bleeding. Another elderly woman, brought in from the same facility where my mom lives – a fall. A guy picked up on West Main Street totally intoxicated. An 18-year-old who would be attending the Julliard Conservatory in the fall – a composer and pianist, whose mom hovered over him. A man with chest pains. A woman with difficulty breathing, confused and combative, while her daughter stood by in denial. All received the same calm, sincere, and concerned care.

And then there was the 40-something bronzed-body 40-something guy who appeared with a bunch of EMTs, two kids in tow.  I heard the call come in;  A 911 call from a child at a rest-stop on I-95. He had been having seizures since New Jersey, stopping along the way to get gas.  His daughter had taken his cell phone to call for help (plus him running into the gas pumps at the rest stop) which brought the EMTs to their aid. They were headed to New Hampshire. Volunteers stepped in to whisk the 9-year-old twins away for some food – they had’t eaten all day. Trying to figure out who the man was – he was incoherent, although he said he had not been drinking or drugging.  As the afternoon progressed, he became more alert and began to wander, unhooking all the wires connecting him to heart, blood and oxygen monitors. His language was vulgar, he looked suspect. But all attending staff quickly jumped to bring him back and settle him down. The volunteer with the children brought them by every now and then, trying to distract them as they were obviously worried and confused. Someone went to the gift shop to purchase them something to do. There was talk of ordering them a pizza. And all the while, tapping into his cell phone to try to find another family member. No police.  “Just” E.R. staff trying to care for a “Mr. Doe” and his two children.

Suddenly, our test results came back. All was well – just a follow-up visit to the doctor later this week was needed. Almost 8 hours later, we got the release papers and were sent on our way.

While this particular incident in my (and my dad’s) life has passed, I am left wondering what is still going on in the E.R. this evening. Pagers going off. Gurneys coming and going. Another shift of nurses and doctors. Ambulances at the ready. Life. And perhaps some death.

How is the woman who was quickly brought into surgery this morning? Has the woman who kept pulling off her oxygen mask settled down in her room “upstairs”? Did the prodigy get the proper meds? And what about the children? Are they cared for tonight; has another family member been found?

And gratitude. For those who do what so many of us cannot.

Keep watch, dear Lord, with those who work, or watch, or weep this night, and give your angels charge over those who sleep. Tend the sick, Lord Christ; give rest to the weary, bless the dying, soothe the suffering, pity the afflicted, shield the joyous; and all for your love’s sake. Amen. (Compline, Book of Common Prayer, p. 134)