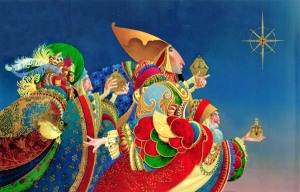 It’s the Eve of the Feast of the Epiphany – the Magi have been following that new, strange, bright light in the sky and they reach their destination at the foot of the Christ child after a long journey. Although not quite the same, we’ve been on a journey recently too – Christmas was twelve days ago and 2014 is almost a week old now.

I still have a few Christmas decorations up, but the tree is down and the needles vacuumed away. It’s a cold and icy Sunday afternoon, with football on the TV and Chobe curled at my feet. While I resumed work after the holidays last week, tomorrow begins the new year in full force as most folks will be back to the usual pre-holiday schedule . . . work, school, setting the alarm clock.

There are changes for me too – especially in the alarm clock department. I’ll be commuting into the NYC CPI offices more frequently now (with boots this week) instead of the walk across the hall (in my slippers). I’ll be working full-time as an editor, laying aside a number of projects I had previously worked on. I’ll still be traveling far and wide across the Episcopal Church – my first trip of this year will be to the Diocese of Upper South Carolina next weekend.

Rows of Sharon was not very prolific in 2013 – it became mostly a collection spot for my sermons. So I’ve decided to go with a new look within this site.  My hope is to return here more frequently in 2014; to share my observations and thoughts on my new journey. I’ve got lots planned this year – two books coming out (stay tuned), more Delta miles, and even a trip to Italy planned for late summer.

Who knows what star I may be called to follow this year. What will you be following? I hope our paths cross on our journeys.

1 thought on “A New Year, A New Look, A New Beginning”