It is from the human heart  that evil intentions come. Mark 7:21

It’s not easy to talk about and acknowledge the evil that is in our world. But we see it manifested in many forms all around us.

This summer I have been reading Nelson Mandela’s autobiography Long Walk to Freedom. And exactly one week ago today, John and I were in Johannesburg retracing many of the steps Mandela took along with others in their struggle for freedom.

Knowing I was going to be preaching right after returning home from South Africa, I read today’s Gospel a few weeks ago to allow me to ruminate on it while away. The juxtaposition of Jesus chastising the Pharisees about their adamancy of following the Law while being immersed in how the laws of a country – in this case South Africa – wouldn’t leave me alone. Until recently, laws in South African centered around a formalized, systematic segregation of blacks, colored, Indians, and whites called apartheid. There were hundreds of laws about where one could live, what kind of education one could receive, who one could marry, where you could travel, what kind of job you could have, and on and on. Racism was an accepted governmental policy.

The history of how these laws came to be and where the roots of racism began started many generations ago. They were based on an interpretation of scripture paired with greed and fear by groups that began with Dutch and English colonialism. Their fear grew out of the belief that one race was superior to another as part of God’s creation. It became their tradition and way of life, and became ingrained in generations to come.

Just as Jesus points out in today’s Gospel (v. 8), the observance of human tradition can become more important that following God’s commandments. Jesus came to call us back to God, to show that adding law upon law, ritual upon ritual, and power upon power separates us from God. He declares that it is not what enters a person from the outside, such as food, that has the power to defile; but rather it is that which comes from within. What Jesus is stressing is that the attitude of our minds and hearts is what is truly important.

According to the thinking of Jesus’ day, an unclean or defiled person was out of relationship with God and therefore unqualified to receive God’s blessings. Jesus shows that rules of tradition may have kept the outside clean but could do nothing to contain the evil that comes from within. Jesus shows that fellowship with God has nothing to do with the kind of food or drink consumed. The life God has created is good. However, from deep within the human heart where priorities are set and choices are made, comes evil. Choices about the kind of food or the amount of food may be evil choices, but they are evil not in essence but in use. Neither does abstinence assure holiness, for that choice, too, may have evil motives.

Work and obedience to God and God’s commandments must come from the heart, and not be based only on external ritual and law. It is our intention and attitude in all that we do that determines our relation to God and to others.

But we know we must live under a set of laws in order to live safely in community. The Law that Jesus continually reminds us is simple to remember, but difficult to live out. We saw the effect of lawlessness ten years ago in parts of New Orleans in the aftermath of Hurricane Katrina. Poverty, fear, and abandonment lead to self-preservation. We can sum up The Law into two categories – commandments one through four show us how to love God, commandments five through ten show us how to love our neighbor. As time went on, these laws expanded out-of-control, in many cases probably serving a purpose for a particular case, community, or time. The root of the Law got lost in the weeds of all the other laws.

Weeding out the minutiae, how can we know what is essential for us as followers of Jesus?

In what ways do contemporary Christians pit one scriptural mandate against another and end up violating the spirit of the law? As next year’s presidential election is already ramping up, with candidates tapping into our fear, I can’t but help ask myself this question. 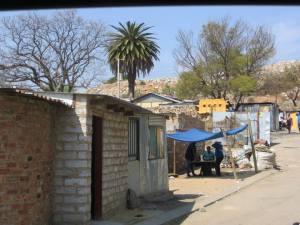 Driving through Alexandra Township and walking through the Apartheid Museum last Sunday, I saw how contemporary laws were used to go against the Law of our religious ancestors, and in many cases were believed to be of God’s will. How can we as a society today not recognize and challenge these systems of oppression and brokenness in our own time? It was only twenty years ago that races were fully segregated in South Africa due to fear and racism. It is frightful how easily we can fall into that same fear of those who are different than us. And we hear a lot of those scare tactics being played out in our headlines today. What frightens me is that so many people easily follow and support those who prey on our fear. Our future depends on the human heart – good or evil.

As followers of Jesus, what is our recourse? Our Baptismal Covenant can serve as a guide in measuring if we are living up to God’s Law. And it can give us courage to speak up to injustice. We promise, with God’s help, to respect the dignity of every human being. To seek and serve all persons in Christ. To love our neighbors as ourselves.

In 1991, the government of President F.W. de Klerk began to repeal most of the legislation that provided the basis for apartheid. He, Nelson Mandela, Desmond Tutu, and many others put aside their long-held beliefs of superiority, fear, and anger to work toward truth and reconciliation. They epitomized Jesus’ teachings that “inward devotion to God and neighbor is much holier than any outward appearance of obedience to rules.”

In this encounter between Jesus and the Pharisees, Jesus acts as teacher, trying to explain what is important and why the laws existed in the first place. Rigid adherence to a law can ignore a crucial call for the conversion of heart and practice. Jesus was very clear: no law was to be used to exclude another person, and no law was to override compassion, forgiveness, and a welcoming inclusion into the community.

Let us not forget this verse from today’s gospel: ‘It is from the human heart  that evil intentions come.’ (v. 21)

As the Letter of James points out, “Be doers of the word, not merely hearers.” Next week James will tell us that, “faith by itself, if it has no works, it is dead.” Let us continue to be diligent in remembering how easily it is to fall into building up laws to protect our fear, and open enough to hear the voice of Christ calling us into relationship with God and with one another.

1 thought on “Evil and the Human Heart”