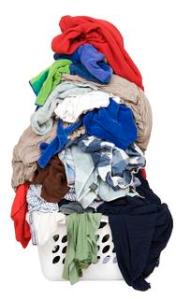 A sermon preached at St. Matthew’s Episcopal Church in Wilton, CT on the 4th Sunday of Easter, based on Acts 9:36-43.

There was a conference at Virginia Seminary this past Friday and Saturday called “Missional Voices.” It was a gathering of Episcopalians from around the church who have a vision of living into becoming a missional church again, much like the early church.

Missional ministry is defined by its advocates as:

“a Christian community that crosses boundaries to embody and participate in God’s mission – loving the world into wholeness – in all that we do: prayer, worship, preaching, teaching, loving service, and daily life.”

Listening to the conference being live streamed Friday, I heard details about a growing missional initiative called Laundry Love. Its founder, a former drug addict and homeless guy, named Christian Kassoff, was one of the presenters. Fully tattooed and pierced, he was nervous talking in front of an audience, but his demeanor calmed as he began to tell the story of Laundry Love.

Christian talked about his hard past and about his love/hate affair with organized Christianity. It was in living at the edges with others who are followers of Christ that he found wholeness, not in a church building. After finding sobriety, he met “T-Bone,” a homeless gentleman living in Ventura, California and regularly visited with him on the street. In one particular conversation, Christian asked, “T-Bone, how can I come alongside your life in a way that would matter?” T-Bone’s response was honest and practical. “If I had clean clothes I think people would treat me like a human being.” END_OF_DOCUMENT_TOKEN_TO_BE_REPLACED

The God who made the world and everything in it, he who is Lord of heaven and earth, does not live in shrines made by human hands, nor is he served by human hands, as though he needed anything, since he himself gives to all mortals life and breath and all things. From one ancestor he made all nations to inhabit the whole earth, and he allotted the times of their existence and the boundaries of the places where they would live, so that they would search for God and perhaps grope for him and find him—though indeed he is not far from each one of us. For ‘In him we live and move and have our being’; as even some of your own poets have said, ‘For we too are his offspring.’” Acts 17:24-28

It’s been two years since I spent 8 days disconnected to the world.  It was a time I was also most connected to the earth. No phone, no e-mail. No electricity or plumbing. Water. Rock. Sand. Open sky. I was an insignificant fleck in the midst of something too large to fathom.

Along with my husband and our two 20-something children, we were on an adventure of a lifetime. We were rafting down the Colorado River in the Grand Canyon.  Along with nine other adults and two guides, we embarked at Lee’s Ferry just over the border from southern Utah onto one of the Colorado’s tributaries. It looked like an ordinary river with some interesting cliffs springing out of the ground. After stopping under a shaded outcropping of rock for introductions and safety instructions, the water began to have a life of its own. From then on it was water, shale, limestone, sandstone, and more water. Colors and shadows changed with every turn. Silence, except for the water lapping onto the sides of the pontoons. Or the screams of all of us as we hung on for dear life going through a rapid, to come out at the bottom laughing and shivering from the frigid waters that drenched our skin. 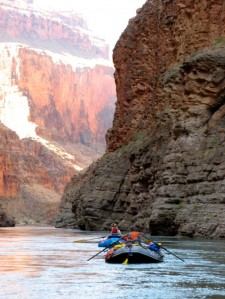 August 9, 1869 – “The river turns sharply to the east and seems enclosed by a wall set with a million brilliant gems. On coming nearer we find fountains bursting from the rock high overhead, and the spray in the sunshine forms the gems, which bedeck the wall. The rocks are covered with mosses and ferns and many beautiful flowering plants.” Major John Wesley Powell from his exploratory expedition journal into “. . . the Great Unknown.”

Layer after layer we went back in time as we floated farther into the Canyon. The dark contorted rocks of the Inner Gorge are the ancient, highly metamorphosed remains of even older sedimentary and igneous rocks. How ancient? Detailed studies of radioactive elements reveal that the Canyon’s oldest rock, the Vishnu Schist, was metamorphosed some 1.7 billion years ago. I couldn’t help but think, “In the beginning, God created . . .”

The rhythm of the water and the lights of the heavens marked our days and nights. We were up at sunrise and usually in our sleeping bags soon after the light left the canyon. Meals were prepared wherever we found a flat place to “park” and set up camp. Lying on my back, with my glasses on, I fell asleep under the Milky Way with more stars than I had ever seen before; I was in a living planetarium.

Each morning we awoke to the sound of birds, sitting up in our bedrolls to discover the tiny tracks of the ringtail cats that had circled us while we slept on the sand. The early sunshine glowed red off the canyon walls; shades of orange on what had been pink the evening before. What would this day bring? What part of creation would we experience for the first time? 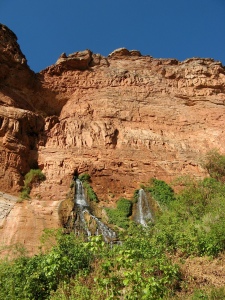 Although most of the Grand Canyon is dry and arid, it teems with life. Day hikes into side canyons gave us opportunities to discover tree frogs, sand verbena and evening primrose. Every crevice, every rock and every stream opened up God’s creation to us in new and unexpected ways. Tiny desert flowers and cacti of all varieties grew out of the rock. Small streams trickling down the side of cliffs would host moss and fern. Mule deer and Desert Bighorn Sheep were common sights, once hunted by the native peoples of the Canyon, the Hualapai. Today their descendants, the Havasupai Indians, try to live by the traditional concept of harmony with all life. They want to preserve the natural beauty of their homeland, believing themselves to be inseparable from the land. Could I live here forever?

A week later, the canyon walls began to lower, and we began our entrance into Lake Mead. On the last day of our voyage, civilization began to creep back . . . helicopter tours circling above us, catching a glimpse the ‘viewing bridge’ placed over a side portion of the canyon for tourists. The Canyon was behind us, but the dust remained in us – in our shoes, our clothes, under our skin. The dust of the earth of which we were created.

In Acts, Paul speaks to the Athenians about God as creator of all, and of the irrelevance of temples that cannot contain the divine reality. We had been in a temple made by God. All of creation is God’s temple. Paul harkens back to Genesis, and the creation of the world. Such is the Grand Canyon. Impossible to be made by human hands, but filled with life where many would say it could not exist. Ever changing, slowly through the millennia.