I have been reading Diana Butler Bass’ latest book, Grounded: Finding God in the World — a Spiritual Revolution. I have enjoyed her previous bestselling titles, including Christianity for the Rest of Us and A People’s History of Christianity.

However, she seems to be on a new journey with this book. Beginning with earth (dirt), air (sky), and water, she weaves an engaging story of connectedness ending in the revelation of the divine in the here and now. It is a love story about the earth, and as Phyllis Tickle reviewed, is “an anthem to the sacred unity of the physical and spiritual in the formation of human faith and in the maturation of the human soul.” For me, it is her story of getting reconnected to this planet, our island home, in sacramental and environmental ways.

Perhaps it was just me, but in reading her book (I’m not finished with it yet) and reading the scriptures appointed for today I seen some parallels. From Isaiah we hear the plight of the exiles, living in a dry, if not muddy, spiritually space. They feel separated from and abandoned by God. But they have not been forgotten: “I have called you by name, you are mine.” By being named, their fear should diminish and they should look forward to the one who will redeem them. God offers a protecting hand in fire and flood. God declares a covenantal love. From the north, south, east, and west God loves “every one who is called by my name, whom I created for my glory whom I formed and made.” (Isaiah 43:5-6) END_OF_DOCUMENT_TOKEN_TO_BE_REPLACED

Note: Many of you have traveled the journey with my mother and I on Rows of Sharon through the past several years. She died on February 22, 2015 and what follows it the homily I gave at her Memorial Service. Given at St. Matthew’s Episcopal Church in Wilton, Connecticut on Sunday, March 15, 2015, it was based on some of the readings of the liturgy: 2 Corinthians 4:16––5:9  and John 14:1-6.

There was no question in my mind what lessons would be chosen for this service in which we remember Trinette. Whether we knew her as Trinette or Aunt Net, Grammy or Mom, I think we can each visualize some portion of her life within these readings.

Some context about the Gospel reading we just heard. Moments earlier Jesus had told the disciples that he was going away and that they could not go with him. This creates not only confusion in the disciples’ minds, but anxiety as well. What Jesus said first was not surprising. “Believe in God” – depend on God to see you through and trust God to care for you. But what he said next was powerfully new. “Believe also in me” – rely on me as you do on God; trust me to care for you. Jesus is asking the disciples to think of him in the same way they think of God. “I and the Father are one.” END_OF_DOCUMENT_TOKEN_TO_BE_REPLACED 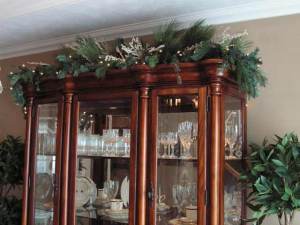 It’s Sunday, so that means dinner with my parents. Since we moved my mom and dad back to Connecticut from Maryland to be closer to us, Sundays and Wednesdays have become their night to come over for dinner. It’s been an interesting journey these past two years sitting around the dining room table.

When they arrive we have a glass of wine and talk about the news – lately it’s been college basketball between John and Dad. We try to stay away from talking politics or religion. Or money. But those always seem to come up.

Mom wanders around looking for the cat while I prepare dinner, and I have her set the table. She reads the magnets on the fridge alongside the pictures of Becca, Jamie, and Chris. Dinner conversation is always a bit wacky. There is a lot of reminiscing and asking questions “. . . what was your favorite subject in school? . . . what was your first dog’s name? . . .” Sometimes Mom will start speaking German or French. John is always able to grab a memory out of her. With some “boop-boop-be-doop” always mixed in.

Tonight my grandmother joined us. My mom’s usual seat at the dining room table faces our china cabinet. Full of crystal and china, its back is mirrored. As usual, Mom sat across from Dad, with John and I at either end of the table. But tonight, Edna/Memom was with us. Every time Mom looked up and past Dad, she saw her mother.

I go over and squat down beside her chair so that both of our images are reflected in the mirror. “Mom – that’s you. Look – that’s me.” We laugh . . . daughter has become mother, and mother has become daughter.

And Memom looks “down” upon us and smiles. 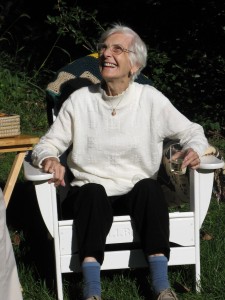 A time for every season

Tomorrow is my mother’s 84th birthday. And we’ll celebrate it over and over again because she won’t remember. I sent her flowers. Every time she sees them she will experience them again for the first time. She’ll receive phone calls from her two grandchildren and will be thrilled. She may remember their names. She’ll forget they called the minute she hangs up.

My mom is perfectly healthy. She even gained 5 pounds according to her last doctor’s visit. Which is good – that’s about 6% of her body weight. She eats well. She loves to jitterbug whenever she hears music – and even when she doesn’t. She wants to dance at my daughter’s wedding (every time we tell her there will be one next year). She sings my dad a lull-a-bye before they go to bed. Every now and then she speaks German, French or Italian. (My grandfather was German, she took French in high school and lived as a child in an Italian neighborhood). And she sometimes swears.

I’m not sure what she does all day when I’m not around. She doesn’t read or watch TV. She likes to look out the window of her condo at the birds and pond. She rearranges her drawers and discovers old jewelry that I thought we had given away. She stares and catnaps.

My mom has Alzheimer’s disease. It has progressed slowly, but everyday is the same. Or a little bit worse. She still knows me, but doesn’t remember my name. She doesn’t remember ever driving, having children, or where she used to work or go to school. Don’t ask her where she lives, what day or year it is, her phone number or what she had for breakfast.

She does remember her name, Trinette. And that she loves to sew, knit, and draw. (But don’t try to trim her fingernails – she still needs them for picking up pins, even though she doesn’t do those things anymore.) She enjoys being with people – anyone! She’s the life of the party at ElderHouse, the senior daycare center she goes to twice a week. She believes she works there, and in many ways she does. She’s one of the mobile clients who loves to talk and move around. So her job is to talk to each person, give them hugs and provide entertainment by singing and dancing. She’ll be the one who’ll hold the snake when the local nature center volunteer comes for entertainment. Or sing along with the weekly piano player. And she loves children. It’s hard to keep her hands off them, especially in the supermarket. Music. Touch. Dancing. The core of her being.

She loves my dad. She calls him her ‘sweetheart.’ He nods and shakes his head. He enjoys coming to our house for dinner too. It gives him someone to have a conversation with. Politics. Religion. Taxes. Medical bills. And a meal that isn’t cooked by him in the microwave. The still both love to drink wine.

My grandmother also had Alzheimer’s. She lived with my parents for awhile until they couldn’t care for her anymore. Once she moved to a nursing home she deteriorated pretty quickly. For about a year she simply “was.” She died when she was 86. Deja vu. And what’s in store for me?

Tomorrow is my mother’s 84th birthday. My daughter is getting married next year. I guess I’ll get a cake with candles. We’ll live one day at a time.