Members of the Confirmation Collaborative (CC) made a presentation at Rooted in Jesus at the end of January 2020. Four of us (Patrick Kangrga, Jen Enriquez, Lisa Kimball, and myself) gave an overview of what the focus and purpose of the CC is and shared why each of us care about confirmation with young people from our own context. We began by inviting everyone present (there were about 75 folks) to get in triads and share a story of their baptism, confirmation, or how they are seeking to be a disciple of Christ.

In a nutshell, the Confirmation Collaborative is an open group of individuals who desire to reorient the Episcopal Church to what confirmation is all about. We want to be inspirational, but grounded; informative but open to conversation; and provide best practices toward helping young people “make a mature public affirmation of their faith and commitment to the responsibilities of their Baptism and to receive the laying on of hands by the bishop” (BCP, 412). You can download the presentation in pdf form here.

We de-bunked some “myths” and shared some “facts”

END_OF_DOCUMENT_TOKEN_TO_BE_REPLACED

It’s only been a couple of weeks since (reportedly) 1,300 Episcopalians and friends met in Atlanta, Georgia for what was subversively called Episcopalooza or “General Convention with workshops, but no legislation.” The brainchild of Bill Campbell, former Executive Director of Forma: The Network for Christian Formation this conference brought together various cohorts within the Episcopal Church (and beyond) to explore formation, evangelism, preaching, leadership, mission, stewardship, and communications. A massive undertaking with a lot of behind the scenes work from many individuals, it was the Church at its best. Worship was extraordinary, workshops were inspiring and informative, creativity was abundant, and Jesus was proclaimed. Even the hotel staff got in on the action and “rooted for Jesus.”

It was too much to digest and while I got to see LOTS of friends and colleagues, I missed many opportunities to network or attend presentations because I couldn’t be at two (or three) places at once. Thankfully, many presentations were live-streamed via Forma’s Facebook page and many were recorded so that even those unable to be present could be fed by the experience. My take-aways and learnings:

END_OF_DOCUMENT_TOKEN_TO_BE_REPLACED

Church Publishing Incorporated’s editorial team now has a Monday Facebook posting (around 9:00am ET) entitled “Mondays with the Editors.” So every three weeks or so I’ll have a post there (which in the past I would have written here). Follow CPI on Facebook to keep up with me and my colleagues to see what inspires us. These were my recent posts:

As Advent begins, it has become my tradition to review what has occurred over the past year, including projects worked on and events that have impacted my life. I gather favorite photos, remember trips taken, and the joys and challenges that have gone before. I begin to write my family’s annual Christmas letter which has become a way of my husband and I to reflect and give thanks. As an editor who has had the privilege of caring for the words of others that will be shared in the form of a published work, I am grateful that is role has taken me on a journey with so many, learning their story as well as developing collegial relationships and sometimes building upon friendships that began long before a book was even a dream.

Such is the memory from November, in which I was honored to “vest” Jenifer Gamber as she was ordained to the transitional diaconate at Washington National Cathedral. I was a friend and colleague long before co-writing (Call on Me) and editing (My Faith, My Lifeand Your Faith, Your Life). And to my joy, many other Christian formation friends also attended; that’s what we do––show up at life’s moments to support one another. And so now I have another photo to remind me of how grateful I am to have friends that I also get to “work” with; women who lead the way in helping make the Church (and the world) a better place. Alongside Jenifer, Wendy Claire Barrie (Faith at Home: A Handbook for Cautiously Christian Parents), and Emily Slichter Given (Building Faith Brick by Brick Iand II) together we have celebrated many milestones in our lives. Being their editor is just icing on the cake, being a friend is what I value most.

END_OF_DOCUMENT_TOKEN_TO_BE_REPLACED 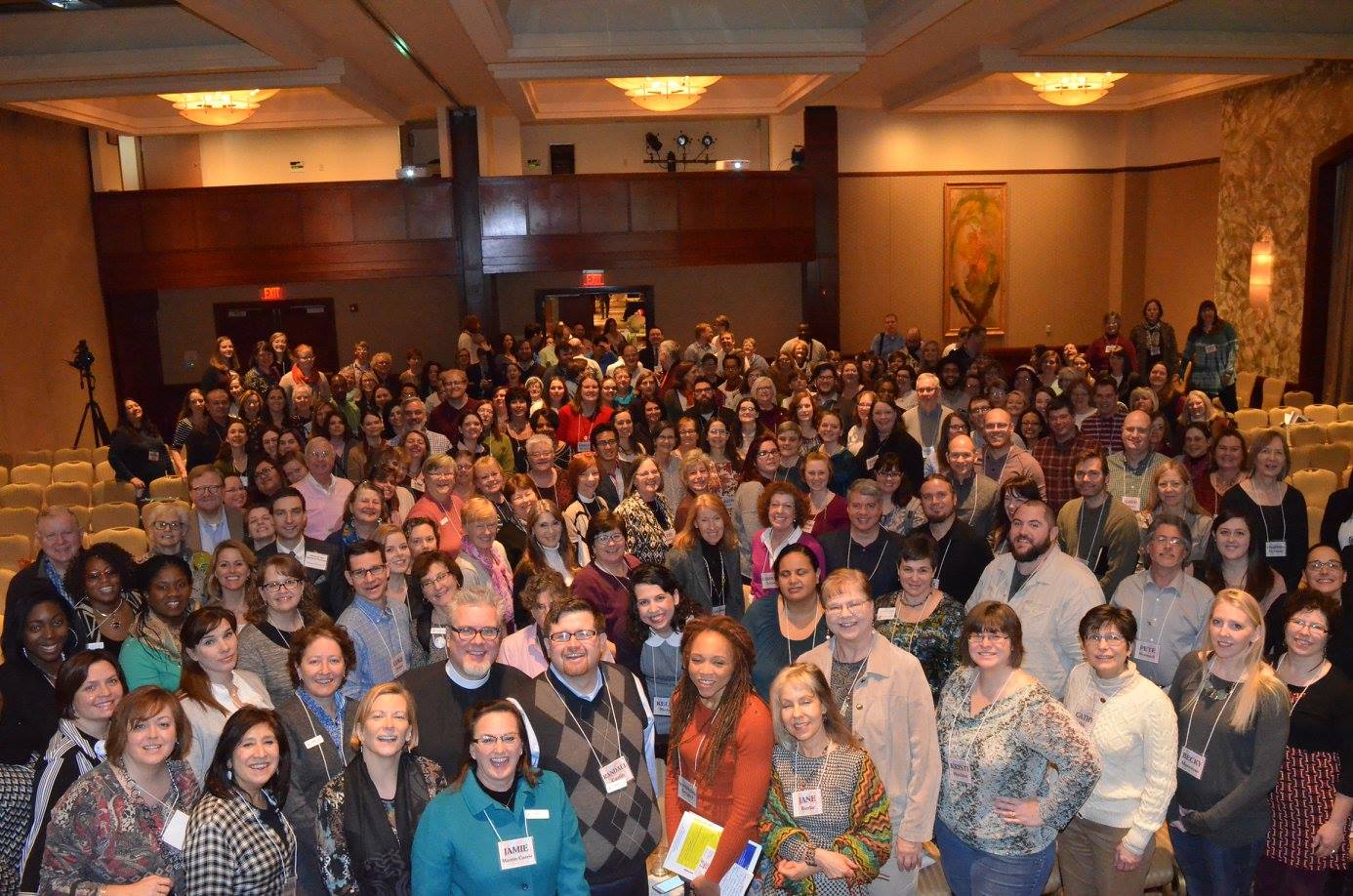 I have just returned from the 19th Annual Forma Conference in Philadelphia, and it occurs to me that our Church can learn much from how this organization for Christian Formation leaders in The Episcopal Church has been behaving lately.

We’re always hearing about the decline in church membership, the “graying” of those in the pews, and younger generations who are choosing to stay away – preferring to be “spiritual” rather than “religious.” These past few days in Philadelphia gave me time to reflect on what was different (and exciting) as I listened, watched, and rejoiced in what was going on all around me.

First, a little history. Most of my adult vocation has been in Christian education on a parish, diocesan, or church-wide level. I’ve seen decline in church attendance, alongside the budget cuts of formation positions (and education funding) on all church levels. I’ve been a Forma member almost since its inception (which began in 1997 as NAECED – the National Association of Episcopal Christian Education Directors), joining when I was a part-time Church School Coordinator.

I’ve been to at least 15 NAECED/Forma conferences, with my first one in New Orleans in 2002. There were about 40 people present and all our sessions were together in a small hotel conference room. We were all women (with maybe two men), mostly lay folk, and most involved in children’s ministries. And we were aging – just like the church in general. We did not represent the diversity that exists in our communities. As years (and annual conferences) went by I was beginning to wonder if there was a future generation to follow in my footsteps, or if the vocation of Christian education was to go the way of the dodo bird (and maybe organized religion). END_OF_DOCUMENT_TOKEN_TO_BE_REPLACED 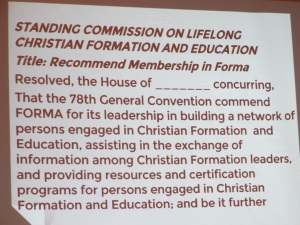 I spent the last few days of January in Houston, Texas attending Forma‘s 18th Annual Conference. It was a jam-packed few days filled with excellent workshops, outstanding speakers, and (most importantly for me) a chance to network and learn from colleagues from across the United States (and beyond) about new ideas, joys, and struggles in the world of lifelong Christian formation in the Episcopal Church.

There have been several Forma members who have shared their perspective of the event that you can read, including Kyle Oliver of the Center for the Ministry of Teaching at Virginia Seminary who wrote about keynoter Brene Brown’s keynote. For those of you who are not familiar with Dr. Brown, it’s best to view her TED Talk regarding vulnerability. The best summary I can give of her amazing talk was what I put out on Twitter during the presentation (@rowsofsharonp). All her quotes: